The following .pdf-files in English introduces chronologically some of the reflections that led to the conclusions presented in the you are a genius-pamphlet:

Nothing – The building block of the universe

The uncertifiable chaospilot’s university in a book by Thomas Heide 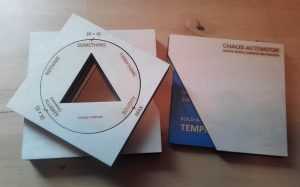 Using events in my life in the early 1990’s as its springboard, this booklet introduces the chaos compass as an expression of a new principle of measurement and a tool of determination and decalibration of mindstates.

Whitepaper – The path of the lost genius

The idea of the mind as both the body and the absence of body is introduced as a means of explaining how it is possible for human beings to hold and sustain a specific version or scale of the universe. The whitepaper presents the original position from which my conscious metaphysical journey took off.

The best philosophical objects are those that can be made, understood and used everywhere by everyone at low or no cost. Such objects are vehicles of a universal learning and change potentiality. The simple fluidity collider made by one piece of triangularly folded paper with a circular hole and a square hole next to each other one of its sides is an example of the incredible learning power that can embedded in the smallest of interventions.


Warning: count(): Parameter must be an array or an object that implements Countable in /var/www/byebyespacetime.com/public_html/wp-includes/class-wp-comment-query.php on line 405